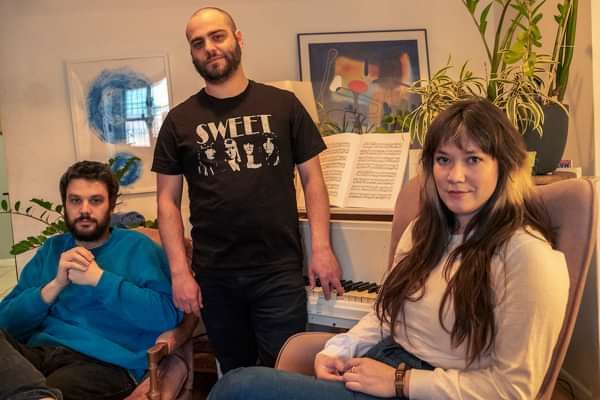 Rather than get stuck in the miasma of genre definitions while the world burns, Editrix have crafted nihilistic anthems that embrace familiar and fun pop songwriting even as it crumbles to bits. The Massachusetts trio’s debut album, Tell Me I’m Bad, darts and tumbles between apocalyptic love song and ethical quandary, playfully picking from and decimating influences ranging from Anthony Braxton to Captain Beefheart along the way. Wendy Eisenberg (guitar/vocals), Josh Daniel (drums), and Steve Cameron (bass) formed Editrix in early 2018 as a way to explore the outer edges of the rock pantheon beyond their respective bands. Rather than bridging the gaps between party rock, noise, jazz, and prog, the resultant “avant butt rock” rabble-rousing moves in pocket dimensions between them. Recorded at Bluejay Studios in Carlisle, Massachusetts, Tell Me I’m Bad excels at heady duality because of Editrix’s ability to blend sublime technical ability with straight-to-the-nerves performance. Eisenberg’s improvised music released on the label of legendary jazz mastermind John Zorn would tie to that raw nerve immediacy, but then so too would Cameron’s work with speed metal outfit Tortured Skull and Daniels’ drumming for Landowner’s post-punk puzzles.