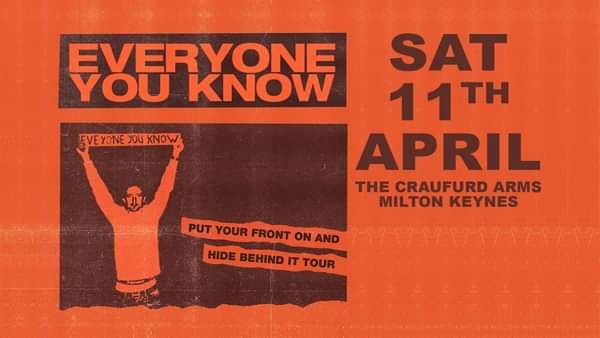 Everyone You Know Following on from a whirlwind 2019 which includes their first major festival appearance on the R1 Dance Stage at Reading + Leeds festival, an explosive 15-date debut UK headline tour, announced as UK ambassadors for Reebok and plaudits and the release of their powerful and passionate 2nd EP ‘LOOK AFTER YOUR PENNIES’: EVERYONE YOU KNOW announce a colossal 19 date regional tour alongside a flurry of support shows and headline festival slot.

EYK have positioned themselves as the soundtrack for youth in suburbia; sonically exploring themes of frustration, friendship, family, challenges, coupled with happiness, hope, determination and dreams and lots more. Their signature sound of a rich tapestry of punk and rave, guitar riffs and hip-hop, matched with heavy-hitting beats and hard-hitting, observational lyricism has earnt them nods from ANNIE MAC, JACK SAUNDERS, BBC INTRODUCING, NME, SUNDAY TIMES CULTURE, CLASH, LINE OF BEST FIT, MTV, WONDERLAND and COMPLEX.

Speaking on the tour, they quote: "We’re buzzing to get back on the road. There is nothing like stepping out on stage to a full crowd chanting your names. The reaction and the response to the last tour was incredible, so we're hoping for more of the same."

Catch the band as they bring their powerful live show to venues up and down the UK, as well as London dates in the shape of AMP London; The Old Blue alongside support slots for THE MANOR and DMA’s (both Brixton Academy). The band also play AMP presents Lost & Found, Malta and confirm a headline slot at NXTGN Festival, Middlesbrough. ♫☆♪☆♫☆♪☆♫☆♪☆♫☆♪☆♫☆♪☆♫☆♪☆♫☆♪☆♫☆♪☆♫☆♪

AVAILABLE FROM THE FOLLOWING OUTLETS: